Today we look at Mark 15:15, Jesus handed over to be crucified:

As soon as it was morning, the chief priests held a consultation with the elders and scribes and the whole council. They bound Jesus, led him away, and handed him over to Pilate. 2 Pilate asked him, “Are you the King of the Jews?” He answered him, “You say so.” 3 Then the chief priests accused him of many things. 4 Pilate asked him again, “Have you no answer? See how many charges they bring against you.” 5 But Jesus made no further reply, so that Pilate was amazed.

Pilate Hands Jesus over to Be Crucified
6 Now at the festival he used to release a prisoner for them, anyone for whom they asked. 7 Now a man called Barabbas was in prison with the rebels who had committed murder during the insurrection. 8 So the crowd came and began to ask Pilate to do for them according to his custom. 9 Then he answered them, “Do you want me to release for you the King of the Jews?” 10 For he realized that it was out of jealousy that the chief priests had handed him over. 11 But the chief priests stirred up the crowd to have him release Barabbas for them instead. 12 Pilate spoke to them again, “Then what do you wish me to do with the man you call the King of the Jews?” 13 They shouted back, “Crucify him!” 14 Pilate asked them, “Why, what evil has he done?” But they shouted all the more, “Crucify him!” 15 So Pilate, wishing to satisfy the crowd, released Barabbas for them; and after flogging Jesus, he handed him over to be crucified. 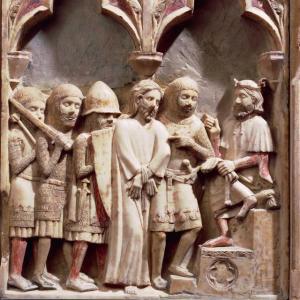 One of the interesting things to notice in this passages, at least to me, is the response to the pressure of others.  Look at Jesus.  Here is Pilate saying basically, who are you?  Jesus didn’t feel the need to respond.  He wasn’t going to play games, He wasn’t there to bargain for His life.  His life was truth, His life was life.

He wasn’t there to bend His knee to Pilate.  Remember, no one murdered Jesus.  Jesus willing laid down His life for the forgiveness of the world.

When Pilate saw one unafraid, someone that knew truth, that was following truth, that wasn’t giving into or living by the powers of this world, as the text says, he was amazing.

Pilate was used to being big and bad and in control.  And Jesus didn’t care.  He had a higher purpose, one that Pilate couldn’t stop and didn’t even understand.

Jesus wasn’t playing by Pilates rules. And that amazed Pilate.

So when faced with pressure, instead of doing what he knew be right, he traded a murderer for an innocent man.

We will face pressure.

What will we do?  Will we stand in truth like Jesus?  Or will we wilt like Pilate?

We each will face pressure.  What will we do it?

What questions do you have?  How does this strike you?  Shoot me an email, comment below, or connect with me through social media.

If you’d like to receive these thoughts by email, be sure to click here and join my email devotional group!