This week’s reflections are written by Rev. Brian Johnston, one of our Associate Pastors here at St. Matthew’s Rooted 2019 – Week Fifteen Day Four Today’s reading is Acts 4: 23-31 Now that Peter and John were released, they joined their … END_OF_DOCUMENT_TOKEN_TO_BE_REPLACED

Today’s reading is Luke 22: 47-71 Peter gets it right in life more than he gets it wrong.  He really does.  Look at his life.  Now, we see the moments he gets it wrong, and we remember those.  We think about … END_OF_DOCUMENT_TOKEN_TO_BE_REPLACED

I heard a quote one time, I don’t remember the source of the quote, or even who said it, but the heart of the quote has always stuck with me.  If you are afraid to fail, you’ll never achieve greatness. … END_OF_DOCUMENT_TOKEN_TO_BE_REPLACED

66 While Peter was below in the courtyard, one of the servant-girls of the high priest came by. 67 When she saw Peter warming himself, she stared at him and said, “You also were with Jesus, the man from Nazareth.” 68 But he denied it, saying, “I do not know or understand what you are talking about.” And he went out into the forecourt.  Then the cock crowed.  69 And the servant-girl, on seeing him, began again to say to the bystanders, “This man is one of them.” 70 But again he denied it. Then after a little while the bystanders again said to Peter, “Certainly you are one of them; for you are a Galilean.” 71 But he began to curse, and he swore an oath, “I do not know this man you are talking about.” 72 At that moment the cock crowed for the second time. Then Peter remembered that Jesus had said to him, “Before the cock crows twice, you will deny me three times.” And he broke down and wept. 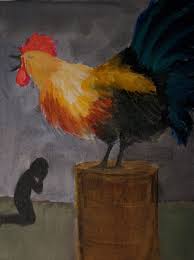 One of the things, that to me, is always important to remember about this text is that it isn’t just Judas that betrayed Jesus on this night.  Yes, Judas was the one that led them to Jesus, but here, we see Peter, three times deny Jesus.  He had the chance to stand up for Jesus in this moment.  What can we learn from this?

First, know this.  We all fail.  Everyone one of us.  Here is Peter.  The leader of the Apostles.  The one that preaches on Pentecost.  The one that everyone looks to.  Peter.  The rock.  And he fails.  He fails worse than any of us probably ever will.

So, when you blow it, remember.  Peter did too.  He failed.  We all failed.  It’s part of our human condition.  That’s not to say that we want to fail or that we desire to fail.  It is to say that it will happen to each of us.

But, second, your worst mistakes don’t define you.  Yes, we see Peter fail here.  But fast forward to Acts.  It is Peter that is the leader.  He is the speaker.  He is the one that everyone looks to, to explain what is happening, to point everyone to Jesus.  Peter did leave and grieve, but Jesus restored him.  And when Jesus forgave him, he was able to forgive himself, and return back into leadership, return back to the family.

Peter failed, yes.  But through the grace of God, Peter’s failure didn’t define him.  God’s grace did.

And last, the disciples didn’t hold Peter’s failure over his head.  The forgave him.  They didn’t keep bringing up his mistake.  They let it go as well.

We need to forgive ourselves, but we do not need to hold the mistakes of others over their heads.  God doesn’t define us by our mistakes.  Let’s not define each other in the same way.  God has shown us grace and mercy.  Let’s show that same grace and mercy to each other.

Grace is the only answer, it’s the only thing that truly and forever changes lives.

What questions do you have?  How does this strike you?  Shoot me an email, comment below, or connect with me through social media.

If you’d like to receive these thoughts by email, be sure to click here and join my email devotional group!

I spent a lot of time in college listen to goofy, fun, Christian music. In the 1990s, Christian music, the kind of music you hear on K-LOVE or other Christian stations was really just getting starting. And back then, there was a song I used to love called “All Fall Down.” And the reason why I loved this song was because it basically said something that I believe, that I’ve preached my entire ministry.

Simon Peter said to him, “Lord, where are you going?” Jesus answered him, “Where I am going you cannot follow me now, but you will follow afterward.” Peter said to him, “Lord, why can I not follow you now? I will lay down my life for you.” Jesus answered, “Will you lay down your life for me? Truly, truly, I say to you, the rooster will not crow till you have denied me three times. 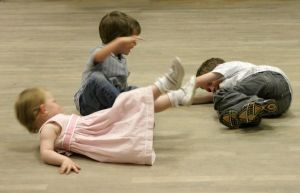 Today’s passage made me think of that old song. Listen to what Jesus tells Peter today.

You will deny. By the end of the night, you will have denied me three times. Now, this is Peter we are talking about. He’s kind of a big deal. The head of the apostles. The one that preached Pentecost. The one that walked on water, if just for a moment.

And he fell down. He made a mistake. He denied. He messed up.

He got back up though. He repented and He stood up through grace. And was faithful. His mistake didn’t end His walk with God. It was merely a bump in the road.

We will each make mistakes. That’s part of the human experience. That’s what happens. What then?

What next? We will all fall down. What will we do after fall down?

We are loved because we are His.

Today, we will fall. May we stand. May we stand on grace. Today, when you fall, dust yourself off, get up, keep going.

All fall down. Though His grace may we get up and keep going! 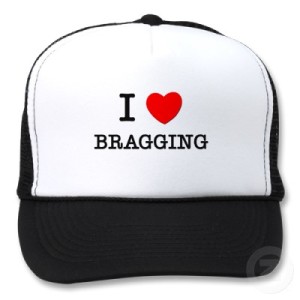 As an Ole Miss fan, I don’t get the chance to brag very often on my team. Right now, it’s a lot of holding my head down and avoiding eye contact. One day I may get to.. One day!

We all do. If something impacts us or means something to us, we will brag on it.

One of the two who heard John speak and followed Jesus was Andrew, Simon Peter’s brother. He first found his own brother Simon and said to him, “We have found the Messiah” (which means Christ). He brought him to Jesus. Jesus looked at him and said, “So you are Simon the son of John? You shall be called Cephas” (which means Peter).

He went, and he bragged on Jesus.

Today, may we spend time braggin’ on Jesus!

The sermon podcast for Sunday, September 25, 2011 is up on Asbury Church’s website.  This is the last sermon in our series about discipleship and the transformed life entitled “Follow Me.” This deals with following Jesus to Forgiveness, starting with ourselves.  In it we examine the life of Peter. We look at Isaiah 53: 3-6 and John 21:1-19.  Also by clicking on these verses you can see my notes from the sermon as a note in the YouVersion online Bible.   You can listen to it by clicking here, or you can listen to it here on this blog by clicking below. And, as always, you can subscribe to my sermon podcasts through iTunes.