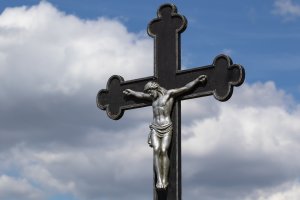 We are going to do our Rooted in Christ as a little different this week. It’s Holy Week, and I’d like to at a different passage that shows us what happens each day. Holy Week starts with Palm Sunday. If you would like to go back and check out our Palm Sunday services at St. Matthew’s, you can click here to watch yesterday’s online services. Through this Holy Week, every day has a different point of emphasis. Most of us are familiar with Maundy Thursday and Good Friday, but Monday – Wednesday, each has its own truth to tell us. This week we’ll look at something significant that happened each day of Holy Week. Today on Holy Monday, several things are significant that happened, but I want us to look most closely at Jesus cleansing the Temple as found in Matthew 21: 12-17:

12 Then Jesus entered the Temple and drove out all who were selling and buying in the Temple, and he overturned the tables of the money changers and the seats of those who sold doves. 13 He said to them, “It is written, ‘My house shall be called a house of prayer’; but you are making it a den of robbers.” 14 The blind and the lame came to him in the Temple, and he cured them. 15 But when the chief priests and the scribes saw the amazing things that he did and heard the children crying out in the Temple, “Hosanna to the Son of David,” they became angry 16 and said to him, “Do you hear what these are saying?” Jesus said to them, “Yes; have you never read, ‘Out of the mouths of infants and nursing babies you have prepared praise for yourself’?” 17 He left them, went out of the city to Bethany, and spent the night there.

One of my favorite little preacher sayings is this – if someone asks you, “What Would Jesus Do?” remember making a whip, and turning over tables is an option. That’s a funny way to talk about what is happening here, but it is true. But let’s talk about what is really happening here. First, the whip. Now, it’s easy for us to think that Jesus is going full Indiana Jones here with a bullwhip, but that is not what is happening. What’s happening is this. He has a whip that he is using to drive out the animals. See, the animals were a source of income; they were the profit, so the money changers and sellers would chase them out. He was not using the whip on people, or even really on the animals. He was using it to clean the Temple.

Let’s talk about what is really happening here. The Levitical Law gives specific recommendations for sacrifice. You do this; you sacrifice that. Many sacrifices called for bulls, goats, and things such as that. But here’s the deal, most folks weren’t farmers or herders and may not have access to the necessary sacrifice. And if they lived far off and walked to Jerusalem for worship, they may not be able to transport such an animal. So what happened is this. Inside the court of the Temple, there would be people selling animals for sacrifice. Now the law called for only the best to be sacrificed, and what these were selling was far from the best. These were the leftovers, the old, the sick, no worthy of a sacrifice. But it was all the people had access to. The sellers were gorging people in selling them what they needed for worship and giving them a substandard offering.

And here is the deal with the money changers. The people used Roman money. But whose face is on Roman money? Ceaser. And who did the Romans think Ceaser was? A god. So, the Roman money had an “idol” on it can not be used in the Temple. So there were people who would exchange your Roman money for Temple money (money changers). And of course, they would take a pretty hefty profit off the top.

So, do you see how every part of this exchange here hurt the average person that came to worship, made money off of persons coming to worship, provided an infernal product for worship, and priced the poor out of being able to even come worship? The sellers, money changers, and Sadducees were using the very Temple of God to make make money. Through these fees and obstacles, they were limiting who could come and worship God.

Thus Jesus says this has gone from a house of prayer to a den of thieves. They were stealing money and worship from the people, especially the poorest of the land. Jesus could not, and would not stand for that. Instead of being a place where all people could come worship, receive pardon and forgiveness, they had turned the Temple into just another weight to put on the back of people. So Jesus puts a stop to it. It turns over their tables and drives out their product. So all can come into the Temple to worship.

And second, is there anything we are doing to keep others from coming in? As a pastor, I want to provide that hospitality and welcome for people to know that Jesus desires a relationship with them? But our attitudes, words, actions, everything, are we drawing people closer to worship or further.

Today, may we point people Jesus with all that we are.