Today as I was reading today’s suggested readings, the passage from 1 Samuel really jumped out to me.  Listen to what we are told today in 1 Samuel 5: 1-5:

The Ark was taken was brought into the temple of Dagon, the pagan god of the people.  This was an act to show that God was inferior to their god.  The people of that part of the world did not disbelieve in the God of Israel, they just believed that He was inferior to their “gods.”  So, they brought the Ark into their temples to show just that.

But then, what happened?  We see that twice the statue to Dagon falls down before the Lord.  And this terrified the people.  They saw the power of God in a way that they were not expecting and were not ready for.  God was demonstrating that He alone was God, and all other idols were inferior to Him. 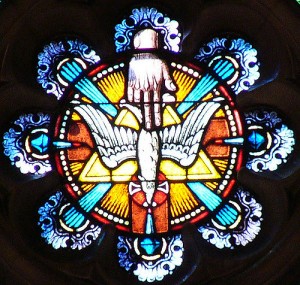 This act, which the people thought would show the weakness of the Lord, instead showed His power and might. There is no one, nothing that is superior to Lord.  He is God alone.

For us today, this is a great reminder to us.  The “gods” of this age are not superior to the Lord.  Nothing can measure up against God’s power and might.  Nothing is as strong as the Lord.  So, whom shall we fear?  What shall we fear?

Little children, you are from God and have overcome them, for he who is in you is greater than he who is in the world.

Our God is greater than all that is the world.  Nothing can measure up against Him.  Do not fear.  Do not doubt.  Trust.