Now, sometimes that does happen.  Sometimes God can just take things away from us, and they can never be a problem in our life and faith again.  That does happen.

Sometimes, I would even say most times, that isn’t the case.  These things can be a life-long burden that we constantly battle and deal with.  For instance look at what happens to Gideon today in Judges 6: 25-27:

25 That night the LORD said to him, “Take your father’s bull, the second bull seven years old, and pull down the altar of Baal that belongs to your father, and cut down the sacred pole that is beside it; 26 and build an altar to the LORD your God on the top of the stronghold here, in proper order; then take the second bull, and offer it as a burnt offering with the wood of the sacred pole that you shall cut down.” 27 So Gideon took ten of his servants, and did as the LORD had told him; but because he was too afraid of his family and the townspeople to do it by day, he did it by night. 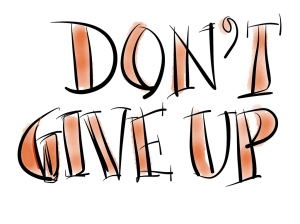 God has begun to use him as a judge to free His people.  But notice, even after God has called him and used him, Gideon is still afraid.  He is still scared.  He still doubts.  In spite of all that God has already done and in spite of God’s calling.

He was still afraid.

Even though everything didn’t suddenly change when he heard God’s voice, God wasn’t done with him yet.

Just like He is not done with you yet either.  Don’t give up, in spite of your weakness, fear, doubt or mistakes.