Several of today’s texts center in on the notion of God choosing someone unlikely to fulfill His task.  I was taken by 1 Samuel 16: 6-13:

6 When they came, he looked on Eliab and thought, ‘Surely the Lord’s anointed is now before the Lord.’ 7But the Lord said to Samuel, ‘Do not look on his appearance or on the height of his stature, because I have rejected him; for the Lord does not see as mortals see; they look on the outward appearance, but the Lord looks on the heart.’ 8Then Jesse called Abinadab, and made him pass before Samuel. He said, ‘Neither has the Lord chosen this one.’ 9Then Jesse made Shammah pass by. And he said, ‘Neither has the Lord chosen this one.’ 10Jesse made seven of his sons pass before Samuel, and Samuel said to Jesse, ‘The Lord has not chosen any of these.’ 11Samuel said to Jesse, ‘Are all your sons here?’ And he said, ‘There remains yet the youngest, but he is keeping the sheep.’ And Samuel said to Jesse, ‘Send and bring him; for we will not sit down until he comes here.’ 12He sent and brought him in. Now he was ruddy, and had beautiful eyes, and was handsome. The Lord said, ‘Rise and anoint him; for this is the one.’ 13Then Samuel took the horn of oil, and anointed him in the presence of his brothers; and the spirit of the Lord came mightily upon David from that day forward. Samuel then set out and went to Ramah. 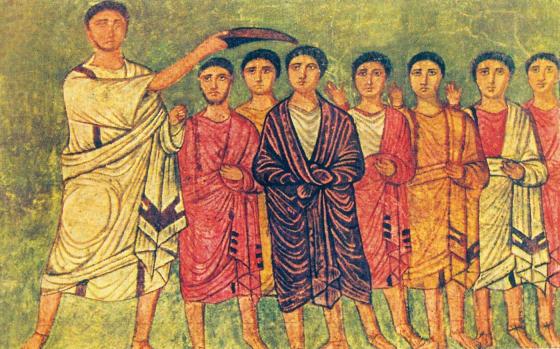 In this passage, God is leading Samuel to anoint the next king of Israel.  Because of Saul’s unfaithfulness, there was a need for a new king. Samuel was being led by the spirit to go and find the next leader.  And is led to Bethlehem.  Led to Jesse and to his sons.

And now he has to listen to God to discern who would be the one to be king.

But look what God tells him before all this starts – do not look on his appearance or on the height of his stature, because I have rejected him; for the Lord does not see as mortals see; they look on the outward appearance, but the Lord looks on the heart.

It doesn’t matter how they look, how tall or strong or powerful they are.  What matters is this.  Where is their heart?  Becuase it is is the heart that in the end determines the actions.

If the heart is with God, the actions will be.

Because what is on the inside determines everything.  My favorite football players have always been the little guys.  The small, fast players, that have no business being out there with they giants.  You can measure height and speed and strength. But you can’t measure heart.  There are these plays that may not “look” like they will be great.

But you can’t judge the heart.

You may not feel like you can do great things for God. There may be too many things, in your mind, standing in your way.  You may not look the part.

So today, let’s know that if God has called us, that’s all that matters.  It’s a matter of the heart.  And let’s be careful how we judge others.  Let’s not make the same mistake of looking only at the outside; let’s remember what really counts, the heart.

As your heart goes, so goes your life.  If your heart is His, then you can do whatever it is that God is calling you to!

If you’d like to be added to my devotional list, shoot me an email, and I’ll add you!