I can tell you all about my calling to be a preacher.  I first felt the call when I was about 16, sitting in a chair at Camp Wesley Pines, talking to Bro. Curtis Lott.  I was a “CIT” a Councilor in Training, one of the youth that was a helper at Camp.  Something happened in a worship service, and there was this feeling that I couldn’t explain where I knew that I felt like God was calling me to something.

But I didn’t know what.

So, I moved on, until a few years later, after struggling with what it was that I felt like I was supposed to do with my life, until sitting on a rocking chair at the old Gulf Side Baptist Assembly, reading through Romans, and I just knew that I was called to this.  The only thing that would give me purpose in life was ministry. So, at that point I surrendered to ministry.  By the way this should show you how messed up I am, the two “moments” of my calling took place, one at a Methodist camp, two at a Baptist camp!

Now there were in the church at Antioch prophets and teachers, Barnabas, Simeon who was called Niger, Lucius of Cyrene, Manaen a lifelong friend of Herod the tetrarch, and Saul. While they were worshiping the Lord and fasting, the Holy Spirit said, “Set apart for me Barnabas and Saul for the work to which I have called them.” Then after fasting and praying they laid their hands on them and sent them off. 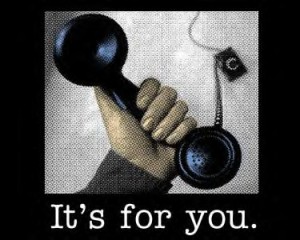 Paul and Barnabas had a calling from God.  I have been called by God to ministry.

And so have you.  Yes.  You read that right.  You have a calling.

And it may be preaching.  But it may not be.  It may be becoming a teacher.  Or nurse.  Or lawyer.  Or ditchdigger.  I don’t know.  But I know this.

No matter where you are.  You are called.  You are.

And there is something today, that only you can do.