Sometimes in scripture, God ask people to do crazy things. He told Noah to build a big boat when it wasn’t even raining, and hadn’t rained in years.

He told Abraham to leave his home and go to place that God would show him.

Jesus asked the disciples to leave behind their jobs and their identities and families to follow Him.

God calls us to things that can be seen as odd and challenging for Him sometimes. Look at what he calls Ezekiel to today.  Listen to Ezekiel 33:31-33: 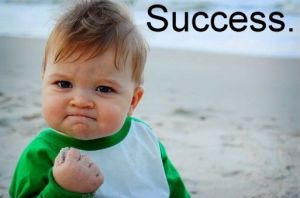 But they won’t do them. God is telling him – you are going to say these things – and no one is going to pay you any attention.

This is not the success that we would like to think about. Succes in God’s eyes is not “success.” It’s being faithful.

God called Ezekiel today to be faithful. To preach. To prophesy. To do what God had called him to. And to leave the results up to God.

What a great notion. Today, for us, success is to just be faithful. To all that we can do to be faithful to God and to His calling. That’s success. That’s victory. That’s what it looks like.

Even though no one did what Ezekiel told them to do, he was successful. Because he was faithful.

Today, let’s be faithful. In that, we will find the success that God wants us to have!